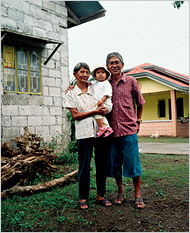 In my global sociology class, I teach a unit on migration and mobility, both of capital and people. The unit covers the multinational corporation and flexible labor, export processing zones and zones of sovereignty, constraints on people over capital and ends with the transnational family as a permutation of transnational life engendered by increasing global migration.

But an assignment that I put together to get students to make the connection between the global and the intimate is to write a reflection paper after the reading and attending class discussion with this prompt:

Write a letter to a child or partner or grandparents left behind in countries like Mexico or the Philippines. Using the complex terms in our class (try to use one or two vocabulary words from this week’s readings or past readings), explain to families left behind the structural forces that produce the phenomena of feminized migration at unprecedented rates and/ or transnational motherhood and families in globalization. Why is there such a huge shift in families under globalization?

I tried this for the first time this past week after teaching this class and this unit for the fourth time. And I have just been overwhelmed by the responses of the students. Perhaps because this is where my research and teaching intersect but the reflections have truly succeeded in meeting my teaching objective for this lesson plan.

I think what’s great about this assignment is that it allows students to connect seemingly abstract, global institutions and processes to the most intimate restructuring and reconfiguration of family life. There might be some ways I’m reifying “family” or “doing family” in this assignment, so chime in on the comment section if there are ways to make it better.

Some letters are excerpted below with the permission of my students. The first is a letter to grandparents, highlighting the multi-generational effect of global migration:

Dear Grandparents of a Migrant Mother,

You probably didn’t expect your life to end up like this. You are getting older, and after years of working hard days and having sleepless nights, you hoped that your work might be easier. After all, you have earned it. Your days of not eating so your children wouldn’t go hungry and staying up to take care of a sick child even though you had an 12 hour work day should be over. After all, your children are grown up.

But here you are. In the house you raised your children in, raising more children. But not your own. Your grandchildren are now in your care. Why? Because their mother is away earning money to support both you and her children. The economy in your country is not creating jobs, especially for hands like yours who have seen centuries of hard labor. Other hands have been creeping into your country, introducing cheaper genetically modified corn and building maquiladoras, desolating your local market while creating impossible choices between poisoning your body or feeding your family.

Contrary to some beliefs, globalization has not given you or your daughter the ability to be in “the drivers seat”. It has given you a bus ticket-you can get off at predetermined destinations. These destinations are your predetermined options that depend on many things-your legal status when traveling to another country, ability to speak another language, and your skill set. For your daughter, her bus ticket has few stops. Because her work visa has long expired and her English is basic, she has options such as housecleaning, washing dishes in a kitchen, or low skilled factory labor.

I’m sure that you will feel some resentment. You raised your daughter to have traditional family values. However, it’s your job now to raise your grandchildren. Sometimes it’s hard, because you can’t chase them down, and they don’t respect you like they should.

Try and understand that your daughter is one of many. One of many mothers torn away from her children because of economic hardship. One of many children leaving their parents and worrying that they will not be able to come to their funeral if they should pass away because of their legal status. One of many women who are scared and vulnerable in a new country where laws and societal norms are often inherently biased against them. Try and remember your daughter as your daughter-the one who you raised, rather than the faceless money order that comes every month. Understand that this is bigger than you or her, a broken hierarchical system entrenched in racism, imperialism, and greed. Raise her children like your own, even though you are tired. Because love has no borders. Family has no borders.

This excerpt is about connecting broken immigration systems and racialized immigration policy in the US:

Maybe your mother is working at a hotel.  She may be changing bed sheets and cleaning bathrooms for people not wealthy by their own country’s standards but with enough money to make it worth it for her.  Maybe she is in a field, picking vegetables so that Americans can have cheap produce.  Either way, she is likely to be earning less than a legal wage in California or wherever else she is.  There’s the curious thing about all of this: here is a woman leaving her home country and family to earn less money than those who grew up there consider suitable, all because this is still thought of as being better than whatever prospects exist at home.

In all likelihood, she is also undocumented.  This means that she is technically in the country illegally and so has little recourse should she be exploited in such a way.  Obviously, you and I both know that she’s done nothing wrong here.  American laws are not written by people like her.  Because of this, she has to contend with avoiding alerting authorities while paying back what she owes for transportation and placement.  She may not even be doing what she figured she would be doing.  Maybe she came to this country thinking that she would be taking care of the sick or elderly and ended up having to do housekeeping work.  This is not uncommon.  The ways the laws are written here allow people like your mother to be exploited.  As is the case with produce especially, much of the American way of life is built on the backs of people like your mother.  We have her to thank, whether she is here legally or not, for the low cost of our luxuries.  The cost is low because it is passed on to her and you.

This excerpt is about the constantly shifting gender ideologies in what RW Connell calls the “world gender order”:

In addition, you may wonder why it is your mom migrating to the US for work and not your father. The best explanation that I can give for this is that larger social constructions of culture see polarize and generalize traditional gender roles between men and women. Women are seen as more submissive and vulnerable, therefore attracting large multinational corporations to favor them as labor workers than men because they may listen more and not resist orders. Because of the “typical nature” of women, they may not form unions as often as men, to fight back these companies as well. Even though your mother has more of a chance here to make money, she is making a sacrifice being away from home and missing family.

Here’s a piece on the history of neoliberal policy in Mexico:

In order to make sense of this I must begin by explaining to you a little bit about your history. Back in the 1990s, the Mexican government agreed to sign NAFTA, and that is an agreement between Canada, the U.S., and Mexico, that would allow for cheaper and easier production and consumption of products and other goods among the three countries. However, NAFTA failed to provide living wages that would allow for families to survive and buy their day-to-day necessities.  NAFTA also undercut social programs like education, health care, and pensions for everyone. As a result many men lost their jobs or were paid so little that the idea of opportunity elsewhere to earn more money, made them risk it all and leave Mexico.

Your mommy then was left behind trying to provide for you and the rest of your family, in the absence of your father. She tried to work at the local companies, but the conditions under which she worked were so terrible, that she could not bear it. Within the local companies, worker’s were paid very little to make tiny things, day after day, without any protection for their well being, knowing that the failure of one worker could easily be replaced by another. Rather than risk getting sick, and not being able to provide for you, your mommy made the difficult decision to find a job in los Estados Unidos.