America Is In the Heart 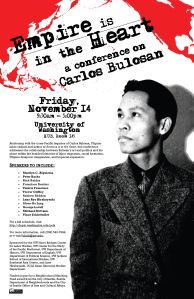 My journey with Carlos Bulosan has been a windy one. I was acquainted with “Allos” (as Bulosan refers to himself in America Is In the Heart) in an undergraduate class called Filipino American literature taught by the indomitable Allyson Tintiangco-Cubales. We had a book a week to read and if my memory serves me correctly, AIH was one of the first books assigned. I remember struggling through the book, just reading it to ensure that I could do the work for class. Not really taking the time to absorb the words, the significance of this man’s writing at the time when he wrote, not losing myself to the history he penned, really, for me–future generations of Filipinos/as in America.

In the past 10 years, since our first meeting, my relationship with Allos has blossomed and withered over and again. Much like the seasons of harvest and planting present in his writing. In the American travels in my heart, from grad school in New York City, post-doc in San Francisco, Allos appeared and disappeared in my classes, in my scholarship, in my imagination. But now, as an assistant professor in Portland, the significance of Allos’ life and words have pushed him to the center of my thinking again as a scholar of Filipinos/as in America and a Filipina American educator working Filipino/a students. Last Monday, at the Filipino American Student Association sa UP screening of the exciting documentary Delano Manongs at the University of Portland, I remembered how powerful it is to connect to Filipino American history and what it meant to me as a 19-something year old to uncover my community’s history as subjugated knowledge, as I learned from the brilliant Dawn Bohulano Mabalon way back when.

In all of this, I reflected about what I’ve been asked to do today at a conference entitled Empire Is In The Heart at the University of Washington, Seattle. I have been asked to reflect back on Allos, his work, his words, and his significance on the centennial anniversary of his birth. What should I say? What could I say about Allos?

Fortunately and unfortunately, I have so much to share. In his short essay called, “The Writer as Worker”, Carlos Bulosan wrote, “…if the writer has any signifiance, it shoudl write about the world in which [s]he lives: interpret [her]his time and evnision the future through his knowledge of historical reality.” Today, I hope to share that the historical reality of migrant farm workers that have their lives and families and communities literally etched into the soil and topography of the West coast of the US, has many parallels to the migrant workers of today who are marking new landscapes of Filipino migrant communities all over the US.

Specifically, the Filipina/o teachers, nurses, hotel workers, and skilled workers  who migrated here in search of stabilizing their families in the Philippines, of a better life for their children and grandchildren. Those who are trafficked into the US, promised one job and then unjustly swapped for another, lower-paid, lower-skilled job. Those who have racked thousands of dollars in debt and are bonded to the obligations to loan sharks, which then gives them no choice but to stay in the US to work in jobs without dignity and become illegalized by the US immigration system.

Allos, this is what I’ll share today. I hope that people will understand that your words, your significance and your writing is still relevant today.