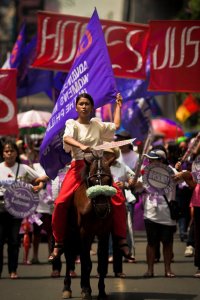 100 years ago, Clara Zetkin proposed to second International Conference of Working Women in 1910 that there should be a day dedicated to the international struggle of working women. The day was adopted by this historic conference attended by over 100 working women from unions, socialist parties and working women’s clubs, representing 15 or more countries and in 1911, millions of women across Austria, Denmark, Germany and Switzerland marched to fight for jobs and suffrage.

Then, just on the heels of these inspiring actions, in New York City, the fire at the triangle shirtwaist factory killed 146 women workers who were locked in to their workplace and substandard wages and inhumane conditions. This massacre galvanized the working women’s movement and solidified March 8th as an international working women’s day, to remind us of women’s ability and need to struggle to change the conditions under which they live.

Today, that impetus remains. Even though the idea of international women’s day has gone all mainstream, from Goldman Sachs and even Michelle Obama is on board. We’ve gotta remember its roots and therefore, remind ourselves the reasons to attend March events for international solidarity or march on the street.

Women are still engaging in militant actions, grassroots organizing and movement-building strategies to empower women to take part wholly in building a society they want to live in. And the world’s ruling elite still invested in global capitalism are still doling out conditions that marginalize a big part of the world, most of them in the 3rd world and in the 3rd world sections of the first world. Women are feeling the brunt in their jobs or lack thereof, in their families, and in their communities.