Context: I just got back from the Philippines. Like. Yesterday. 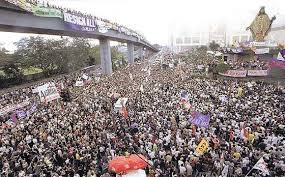 All of us climbed into a van headed to Quezon City, all 12 of us. As we passed by “Our Lady of Peace” and made a right onto Edsa, my sister, Alexie, asked our aunt, MamaNes, “What is that?”

She began to tell us the story of EDSA, 25 years ago. She talked about how everyone came out to the streets to let their voices be heard against the dictatorship. She remembered how she took her 9-year old daughter to the streets on one of the last nights of the protests in fear that she wouldn’t be able to get back home that night, she had decided that the rally was important enough for her daughter to skip school for. She turned to my mother and remembered how swollen her ankles were from walking so far and how big my mother’s stomach was, pregnant with my sister. She reminisced about the lightness she felt in the streets with the people there, how people and restaurants would bring food to offer it to the random strangers who held down the protest lines; and how Nanay, my grandmother, insisted on taking pan de sal, pancit, sandwiches and water with her to the rally to give out to the protesters. MamaNes remarked at the spirit of giving that held the protesters together, from the shrine to Cubao, so close to toppling the dictator that held them apart for so long. People Power. The electricity of it not only successful at ousting a dictator, but more importantly, bringing people together in unity for a purpose, to restore life.

In the wake of Egypt’s People Power, and Libya’s growing resistance and the resonance across the Middle East and North Africa, it is fitting to think about the consequences and lessons learned from EDSA, if only that struggling peoples can find the strength to carry out the change they have truly intended and manifested through mass mobilization.

25 years after People Power, the Philippines is bereft of substantial social services. The costs of daily goods are consistently out of the reach of common people. Peasant and landlord systems are concretely in place in a majority of rural areas in the Philippines. And when I say majority, I mean, most of the Philippines. Like, people still live in huts with no running water. Needless to say, development is uneven. Makati condo skyrises v. nipa huts. It’s like 2011 and 1950 is all going on at the same exact moment. Migration is the only option for most Filipinos and the migrant industry is the flimsy stilts on which the Philippine GDP is perched upon. To add insult to injury, most Filipinos working abroad are working low-wage jobs and are exploited and abused at an alarming rate.

A list of few among many. So these are all rehearsed and, as a matter of fact, common knowledge now. Even to Filipinos who participated in People Power 1. They all know this is how it is. These facts are actually the reasons why People Power 2 had to happen.

But the question remains, why and what went wrong? No simple answers here. And really, this question deserves a dissertation length explanation.

But for me, and my blog, and my jetlag, and you my  wordpress readers, here are some of my thangs:

I think that the mass mobilization on EDSA 15 years ago was botched when a government and governance didn’t follow its inspiration from the outcry and demands of the Filipino people. Then, the democracy that was inserted in was influenced heavily by US political leverage that was already in place via the 1940-shennanigans aka Philippine independence. The economic decisions and strategy development leaned on foreign investors and capital. So when could the Filipino people really say what they wanted and how they wanted their own country to be run? Nevaaa.

No on asked what they needed

For a government to figure out what things they need to work on and what thing they need to start doing, shouldn’t someone do a thorough assessment of what people need and want? I’m not sure if there were any comprehensive analysis of the national needs and problems of the Filipino people. If the Philippine government published such a document, please forward it to ya girl.

“Those who look outside dream, those who look inside awaken.” Carl Jung, said that. (And I also saw it on a subway poster earlier)

I think post-dictatorship times makes all this room for civic engagement and new democratic space, but if the outlook of those who are in positions of power is towards how to compete in the global capitalist game, then things get all screwed up. Really the above quote is about those–like national bourgeoisie, land lords and ruling elites of the Philippines–who look outside–meaning to foreign and external forces and capitalists–will always be dreaming of trying to get where the big dogs are at. But really a good start could be to look inside–to the Filipino people themselves, what they need, how they want things to be run.

Ok, last thing for tonight, this outside dreamers and inside awakeners idea really resonates with me. The whole time I was in Manila, I really took notice to how much inefficiency there was in the malls, banks, restaurants. All of the places that were disguised as first world development. All of the places that looked like wannabe-American.

And then, when I was in the Visayas, in the rural areas, I noticed all the ingenuity Filipinos had in working their land, building boats, living on such meager means. Building outriggers, boats, houses, rainwater collectors, so much more, from out of what they had at their arms reach.

When Filipinos try to look outside, and be like other people, it is a hot mess. But when I saw them understand their needs, master their surroundings and build from there, wow. That’s gotta be something.

People power, man. Power to the people, cuz we did it twice. Third time’s a charm.